There is no there, there

THERE IS NO THERE, THERE (2019) is a time-based multimedia project presented in the MFA degree show, located at the Meetings Rooms on the first floor of the original WCA building. The work was adapted to its specific location and features a video with sound through an LCD screen mounted on a wall, installed with photographic vinyl prints.

The video is a montage showing diverse landscapes captured on journeys from one place to another, while the prints is a collection of 100 photographs documenting footprints randomly found in transient spaces, punctuated by ambient sounds of travel and footsteps. These materials were selected from an organic accumulation of digital files created using smartphone cameras, gathered informally from different places over a number of years.

The work is an attempt to stimulate a meditation on the movement of people, from the microcosm of walking around a neighbourhood to the global scale of international travel, alluding to its wider and nuanced contexts relating to migration, geo-politics and the environment which currently dominate public consciousness.

The footage of journeys aim to represent the action while the footprints intend to illustrate its traces, effect or residue, thematically linking both elements as part of the same ecosystem or thread. This theme emerged naturally in the process of selecting and editing video clips from a personal archive, when I was drawn to the visual qualities of the panning and zooming footage of different landscapes, which led me to think about ideas around movement of people, time, collections, and current affairs.

The prints on the wall were later additions to further develop the concept as a response to specific conditions of its allocated space, purposely choosing black and white as a colour and regular grid as a pattern after considering other elements in the room.

The title hopes to reinforce these layers within the work. 'There is no there, there' is a phrase attributed to writer Gertrude Stein, a remark in her book Everybody's Autobiography (1937) in reference to the loss of her childhood home which is no longer there, a sentiment that may resonate with anyone who has ever moved between places in some way.

On one level, this phrase sums up my personal observations on journey and movement, in that it always happens and always will as time marches forward to change everything again and again, leaving behind traces through material or imprints that are often ephemeral or peripheral, and memories that may last longer but will also fade.

Considering the video through the lens of current affairs, the title aims to reflect the reality of migration for many people today, often forced to move by natural disasters, conflict or lack of resources and opportunities, yet more increasingly find themselves in a state of limbo where they can no longer sustain a decent and safe life in one place, but may not necessarily find another, as seen in the different waves of recent migration crises.

Notably, the video and photographs have been collected from my own freedom to move around, a kind of privilege in itself that is not necessarily available to many others elsewhere, apparently determined by the accident of birth and/or circumstance. I hope this juxtaposition between the material and the allluded themes can help stimulate reflections on notions around movement and migration, including: Who has the right to move around? And why? Why do people move or travel? Where do people come from? Where do people go? And why? What are the implications? What is left behind? Who is left behind? What is 'there'? What is 'here'? And where do we go from here? 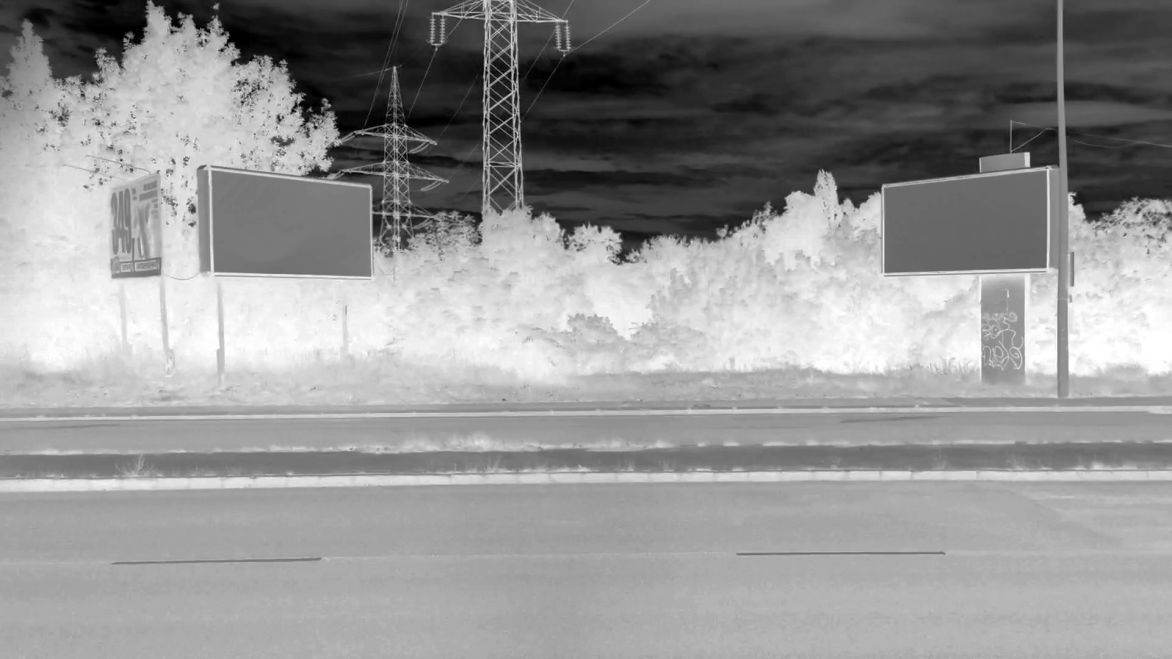 Video still from There is no there, there (2019): The montage aims to represent the act of movement between a series of landscapes, edited with visual effects inspired by the aesthetic qualities of surveillance footage or night vision technology, often seen in news coverage of search and rescue missions, war operations, and related migration stories. 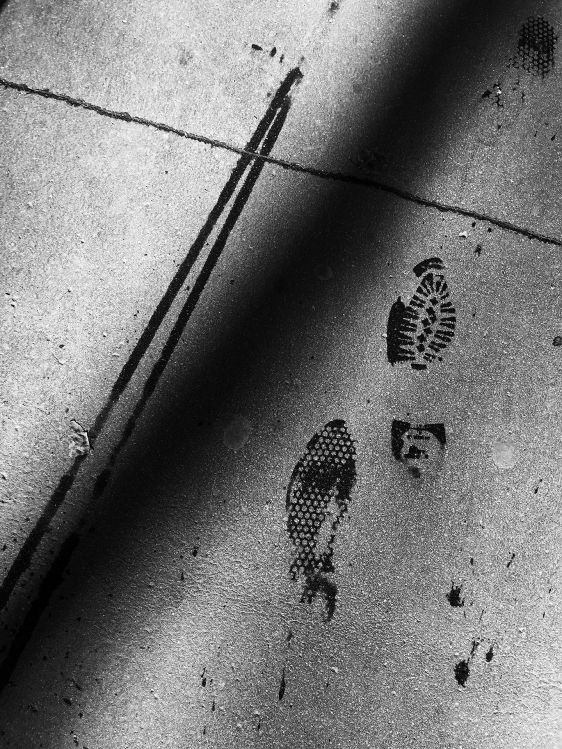 Footprints as residue: These images illustrate recurring themes and methods in the practice, such as the collection of traces in transient spaces over time.

There is no there, there is the latest development from an ongoing series of works that originate from a personal archive of material - specifically digital images and data from mobile phones in several cases - reflecting one of the key concerns of my MFA research: reconsidering informal accumulations as potential artefacts or material for making.

It continues efforts from recent works like Archive Abstract (2018) and Cracks (2019), both created using selections of fragments extracted from an organic heap of digital assets.

Similarly, the use of video relates to previous and ongoing experiments with this medium, including recent works like When An Other Comes Calling (2017), Memory Cloud (2018), HEY (2018), and Neologic (2019).

This project demonstrates recurring themes and methods in the wider practice, from the exploration of found traces in public spaces (Attention, 2019), to the use of collections to present related or similar content (The Steps We Take, 2018), typically gathered randomly over time from various places and contexts.

It also reflects an ongoing interest in matters relating to migration or movement, as illustrated in the concept below - a project in development which began to formally emerge from 2018.

December 2018: This collage experiment is an attempt to further visualise an installation idea, which aims to explore similar themes to There is no there, there. It also shows footprints as a recurring image in the current practice. 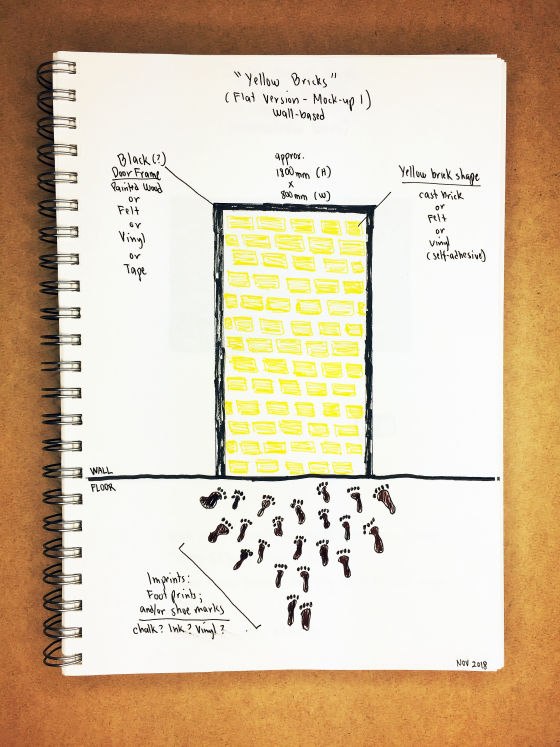 November 2018: This rough drawing is the beginning of a specific idea to explore the complexity of migration in the current sociopolitical climate.

This project relates to works and practices already engaged in time-based media and sociopolitical themes.

Jonas Mekas was a key point of reference for his numerous films made from fragments of personal footage he accumulated over time (Outtakes From The Life of a Happy Man, 2012), typically using analogue camcorders. I consider the use of smartphone cameras today as a natural progression of this process and style, which help amass my own archive of random images that eventually form various works as montage, serial or collection.

The Image Book (2018) by Jean-Luc Godard illustrated a similar approach, but adds found footage and mass media as additional source material - a recurring element within my own practice, though I primarily focus on online streaming at this time. Nevertheless, his bold use of special effects - from colour manipulations to imaginative transitions - encouraged me to experiment with editing until I found suitable options that work best for my own intentions.

Similarly, the film In Praise of Nothing (2017) by Boris Mitic demonstrated the potential beauty and value of seemingly banal images when he crafted a series of random scenes and vignettes crowdsourced from people across the world. This approach seems suitable for contemporary society which produces a constant stream of images from the everyday to the exotic, conveniently captured by ubiquitous mobile devices and portable equipment.

Charlotte Prodger showed the poetic possibilities of smartphone videos in BRIDGET (2016), oscillating between public landscapes and personal spaces with tender simplicity. This work made me reconsider my engagement with videos from my own mobile archive, raising awareness of its possibilities as a tool and/or material.

In her recent show at White Cube, A Fortnight of Tears, Tracey Emin embraced digital technology by showing large photographic prints of mobile phone selfies and a vertical video projection showing her mother's ashes, blending seemlessly with her more traditional works with drawing, painting and sculpture through an overarching theme of loss and remembrance.

Doris Salcedo similarly tackles this in her installation Palimpsest (2013-2017), also recently exhibited at White Cube, a monumental work with disappearing names of migrants that drowned at sea while attempting to reach Europe. It reminded me of the harsh conditions in which some people find themselves, leading to desperate choices and dangerous situations often influenced by factors outside of their own control.

This encounter, as well as seeing related works by Ai Wei Wei (Human Flow, 2017) and Tania Bruguera ([changing number], 2018), contributed to the development of There is no there, there. Admittedly, these established artists have more experience, budget, support and access than myself, but I still feel compelled to explore this area in my own small way as it comes up organically within my practice, perhaps due to my sometimes peripatetic background and some previous work with migrant communities. In any case, I hope to continue my observations of transient spaces, traces of life, and movements of people from my own perspective.

The collection of footsteps is a significant part of this, reflecting my curiosity in the stories and ideas embedded within the spaces I inhabit. In this way, I feel connected to the ethos of Birdhead, a photographic partnership between Ji Weiyu and Song Tao, who create random groups of images from Shanghai (Welcome to Birdhead World Again, 2011), operating between conceptual and documentary photography. In an interview with Tate, they explained: "We photograph things that are meaningful to us" - an approach that relates to my own attitudes as I continuously aim to capture details that appeal to me, from footsteps and graffiti to cracks and discarded objects, hoping to find points of entry to unlock any potential.

Furthermore, in a broader sense, this project echoes aspects of psychogeography, a recurring approach within the wider practice that manifests itself in a number of works including the discovery, observation, documentation and presentation of places and traces in relation to human experience. 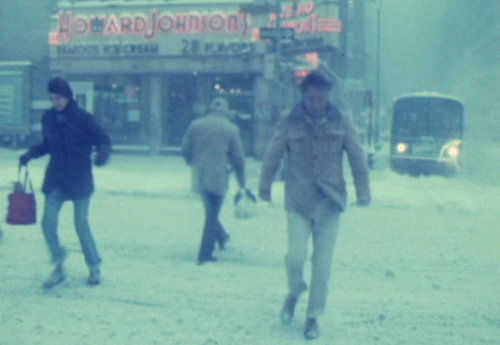 Jonas Mekas [on video montage]
Outtakes from the life of a happy man (2012)
Film from accumulated personal footage
Serpentine at Peckhamplex, London, 2018 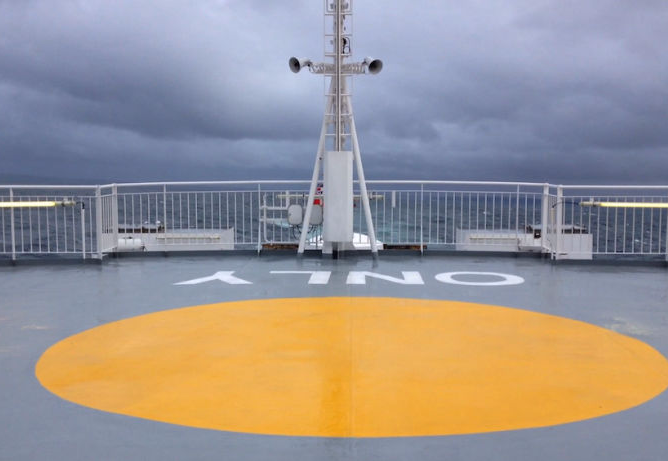 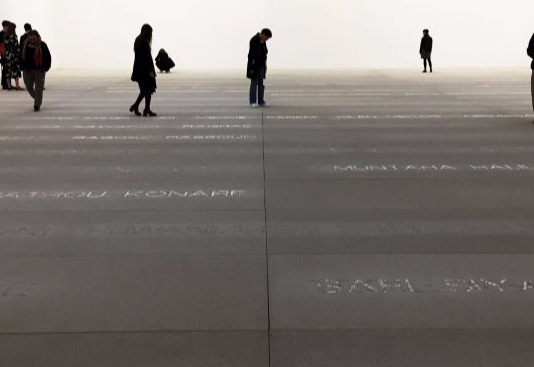 back to top next
This work attempts to reflect on complex themes relating to the movement of people. For local information relating to migration, please explore CARAS and South London Refugee Association, both organisations work within the South West London area. For general information on migration, please consider institutions like the
UN Migration Agency, Overseas Development Institute, and Pew Research Center.