COURSE OF EMPIRE was an exhibition of a particular series of works by the artist Ed Ruscha. It featured a double painting cycle from 1992 and 2005 which highlighted visible changes from the streets of Los Angeles, a concept that relates to my own attempts to observe, document and reflect public spaces in relation to contemporary culture.

Seen together in the UK for the first time, the show presented 10 paintings from two cycles: the original five from the Blue Collar Series in 1992 combined with updated versions of the same landscapes from 2005, together forming Course of Empire which was previously unveiled at the Venice Biennale in the same year.

The images illustrate how a place, and consequently its people and cultures, can change over time, from a trade school falling into disrepair awaiting resurrection or demolition, to a telephone booth disappearing from sight, and a manufacturing building transformed into a store adorned with signs, advertising and graffiti. This process was echoed by his colour choices, starting with black and white in 1992 and shifting into full colour in 2005.

“an accelerated, aged version of the same urban landscape”

Ruscha described the latter paintings as “an accelerated, aged version of the same urban landscape,” inspired by an earlier painting cycle that originated its title, The Course of Empire (1834-6) by Thomas Cole, which depicts the rise and fall of an empire across five pictures based on North American topography.

These works show the implications of time which on one hand function as a straightforward representation of what is often a natural cycle of changes, and on the other hand evoke a cautionary tale on how some things can be inadvertently lost or forgotten. It is up to each viewer to determine their own position within these landscapes. 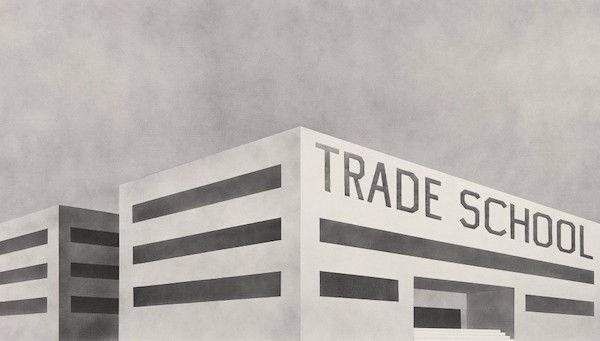 A black and white painting from Blue Collar Series (1992) by Ed Ruscha, later updated with an altered colour version in 2005 to form Course of Empire 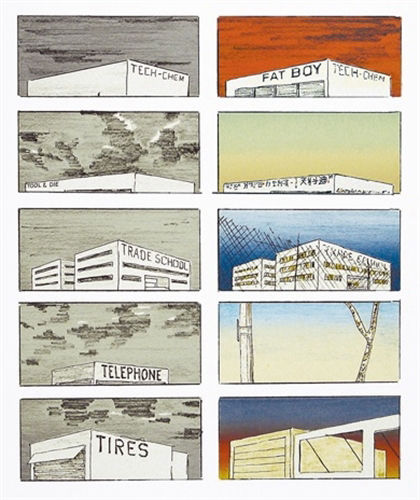